I wrote this script while studying the Battle_Scene class with the intentions of creating a Custom Battle Scene for TGP. 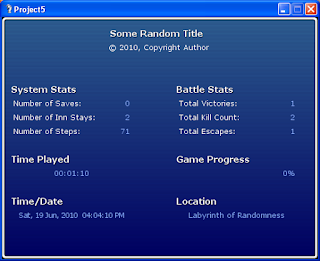 The Extra Stats window can be accessed from the menu to display the following stats:

Download the script from the link above, copy and paste it above Main. Instructions and conditions of use are in the script itself.

I’d be interested in suggestions for additions (if they’re viable) for inclusion in future versions. If you have any ideas, leave them in the comments and I’ll see if I can add them.