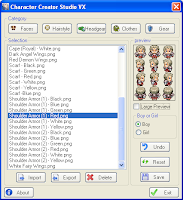 Just like the Character Maker for RMXP, Character Creator Studio VX allows the creation of RMVX character sets. It does have a lot of resources available to create some decent characters, with the ability to add multiple items.

What I like most about this program though is its simplicity and ease of use, and its features:

All images are saved as PNG format, including the character building resources, which means that, if you know what you’re doing, you can create your own hairstyles, clothes, etc. and use them directly.

Not only that, Character Creator Stuido also comes bundled with another program, called Sprite Stitcher. This allows you to “stitch” individual character sets together (created with the Studio or somewhere else) into a single character set, up to the maximum of eight.

In short, this program is the best one I’ve come across so far. I know that for myself I’m so glad I stumbled across this program simply because spriting is NOT something I’m good at. And I know that others will find it as much of a boon as I do. Highly Recommended.